Last January, I produced and directed my first ever short film called Kuya Bunso. The story evolves around two siblings named Jess (Jehzeel Laurente) and Jackie (Cai Abbass). The eldest is a twenty something special child while the youngest is a goal-driven seventeen year old. I used the script I wrote for the Sinelab workshop I attended last year. I am happy with the outcome of the project because my blogger friends helped me out in terms of agreeing to do the film for free and for helping me out with the technicalities.

The 12th of June Poster designed by Alan Penilla

Three months ago, I wrote a script about a virtual assistant who is about to face her fears on a specific date. The title of the short film is The 12th of June. It is somewhat similar with one of my blog entries I wrote way back in June.

Eloisa, a virtual assistant at work portrayed by Jade Lopez

To be honest, I wrote the script at a coffee shop with a pen and paper. I was a bit emotional that day. Though the laptop can make things easier for me, nothing beats writing with the use of pen and paper especially when creative juices out of your angst starts pouring in.

Jade Lopez as Eloisa in The 12th of June

So there. I wrote a script and later on made an outline about the characters. I then thought of my friend Jade Lopez to play the lead character Eloisa. I’ve always seen her do Kikay roles on tv and film, but I want to unleash the character actress in her. I called her up and told her that I have this script and I’m planning to shoot in two weeks. She said yes right away after I narrated the concept.

I asked Kring for some tips and recommendations. Kring is one of the brains behind Flippish.tv and I am happy because she is just as excited as i am! 😀 She recommended a good cameraman, editorÂ  and gave me some important pointers when it comes to the lights, the camera, characters etc. I wouldv’t done it without her, really!

Peter, Jen, Maire and Ada behind the scenes

Since the story involves the emotion of a young virtual assistant, I asked Ate Jen, who is a virtual assistant and part-time actress to be my assistant director. I needed someone who can help me out bring out the best in Jade and my other characters. I am happy that she took the task of becoming my assistant director, which is a first for her. Kuya Peter also suggested some ideas and helped in the production. He used to work for a big network 😀 My highschool bestfriend Maire wanted to join out of curiosity, so i instantly made her my production manager.

Brian Ong and Jade Lopez as Robert and Eloisa

So I have my staff for this project. I started searching for the supporting cast. I chose Brian Ong to play the role of Robert, Eloisa’s love interest simply because he resembles the guy I pictured in the script while I was writing it. Robert is tall, smart, good-looking and simpatiko. Despite his busy schedule, Brian gave me a yes!

Shena and Aaron as Liza and William, Eloisa's loyal friends

Some of the other bloggers who filled the supporting role are Aaron and Shena as lovers William and Liza. Their LQ scene is a must-see. Most of the people who saw their photos thought they’re really a couple! Sana nga maging sila na hehehe 😛

Jhelo is my favorite male character actor. After playing the role of Uno in Kuya Bunso (by accident, btw), he is back as Joseph, the maton (?) brother of Eloisa. He appeared in two remarkable scenes. What I like about him is that he gives funny suggestions and we all ended up laughing with the execution LOL 😛

Jade and Jane at Krispy Kreme

My big sister Jane Chua played the role of Frida. I find her perfect the role simply because she and Jade really look alike. Is she Jade’s sister? I will not tell for now 😛 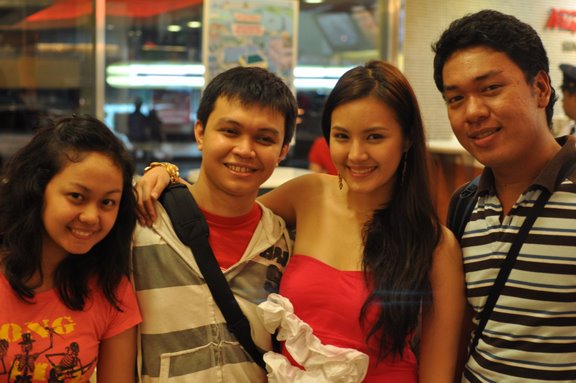 The coffee shop people include Peter and Jen representing a sweet couple, Winston and Ada with their funny LQ scene, Edward as the irritating smoker and me as… a tambay LOL. Make-up artist Em-em Rosales also did a cameo role as.. basta hehe 😀

My friend Angelo Agojo also did a cameo role as someone whom you’ll see in the sequel (just in case it pushes through). He made me happy because he mad it on the shoot despite the fact that he was busy shooting for the Manila scene of his C2 entry, which won last September 25.

With my lead actors Brian, Jade and Angelo

All in all, we shot the 22 minute short film for 13 hours. I would like to thank Krispy Kreme Greenhills for allowing us to shoot on the store on a Sunday. You guys rock! 😀

I would like to thank Jehzeel Laurente for being my co-producer, Lizz Buenaventura for the wonderful storyboard, Josh Liao for the assistance, Eugene dela Cruz for the Direction of Photography, Raffy for the Editing, Dondi Virrey for the musical scoring, Alan Penilla for the poster (to be posted here soon!) , Em-em Rosales for the make=up, Ada Lajara, Edward Arevalo, Peter Juan and Winston Almendras for the photos, Cai Abass, Aaron Gutierrez and Chris Wong for dropping byand for the support and to everyone else I missed, Thank you! Hehe I”ll update this post soon 😀

Since some bloggers are asking me for my plans about the film. I am planning to set a mini-film showing sometime in November. I am really hoping it will push through 😀